It is time for some March Madness! Yes, I am talking about basketball, not passing periods preceding the much anticipated Spring Break on the horizon. One of my favorite parts of March Madness is the competition. Watching teams, big and small, compete. As many of the athletes are playing for the last time, there is so much emotion that pours out before, during, and after these games.

After watching some of the conference tournaments this weekend, I enjoyed listening to the coaches speak about their teams in the postgame conferences. As the coach and players face the end of their season and for some the end of their college careers, few coaches seem too concerned at that point with the number of wins or losses they achieved leading up to that final game. In facing what is the end of a coach-player relationship for the season, or longer, the focus goes to where it should be…the players. It is amazing how quickly winning is no longer as important as it was a few hours prior in these postgame interviews. What some would say is the entire goal of the season, no longer matters; losses still sting and winning is still celebrated, but the players and taking care of them is where coaches often seem to place their focus.

I often hear people say that sports build character. While I love sports, and believe that sports do provide an opportunity to build character, I think we need to challenge this statement. Sports do not build character; coaches build character. As I reflect on my own athletic endeavors, watch my kids participate in competitive sports, become more involved in high school athletics, and watch countless hours of sports on television, I have seen many good coaches- some great ones even, but I have also seen my fair share of poor coaches too. It is easy to see in my aforementioned experiences that coaches are the ones who set the expectations of what is important and are the people who build character in their athletes. Those who only focus on winning, may win, but they win at the expense of their athletes; and rarely can they sustain this level of performance. Those who focus on doing the small things right, working towards continuous improvement, and build athletes of character and purpose- win in the long run. They not only build programs that last, but also people of character who will also last and persist long after their playing days are over. 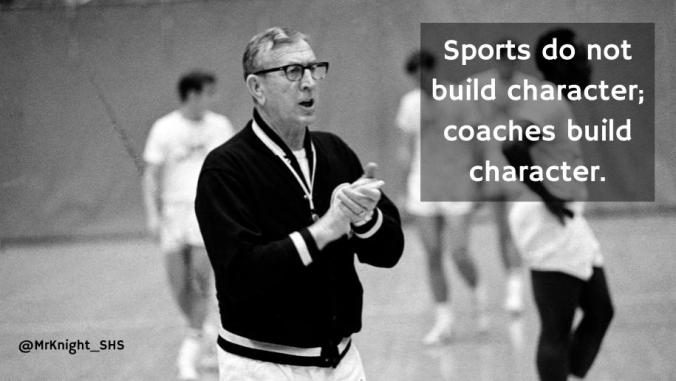 Much of the same can be said for educators, we win by focusing on building character and doing things right. The statement I made in the last paragraph sounds a little ridiculous if you apply it to education. Saying sports builds character is like saying the content we teach builds character. Once again, content does not build character, teachers build character. We need to treat our job this way. I know, you are not their parent, and maybe this should not be your responsibility, but your responsibilities as an educator are much larger than just being a content dispensing machine.

As I write this, I am reminded of an old football quote. After winning a championship, a reporter asked Coach Amos Alonzo Stagg, “What do you think of your team?”  He replied, “I’ll tell you in 20 years.”

As we push into the madness of March, the absurdity of April, and the mayhem of May, remember that these months may be the last chance you get to make a lasting impact on your students. They will be the last months you get the opportunity to plant a seed that will continue to grow long after the students have left your room. Remember that it’s not the content, nor the competition, nor school alone that builds character, you, the teacher…the coach, hold the power to build character.