We returned to school this week from our township’s two week Fall Break. I always try to find some ways to relax during breaks; Netflix is often one of those ways. While I do not have much time to watch TV during the school year, I appreciate being able to watch an entire series over the course of a few days. TV on demand is definitely a new way of watching television programs. One thing I really appreciate about Netflix series is they do not need to stick to the traditional format of television. Netflix does not need to stick to a certain viewing schedule or allotted amount of time for each episode due to network scheduling and sold commercial time. Often, there are fewer episodes in a “season” and each of those episodes do not have to fit a certain time frame, i.e. 47 minutes for one show and then 63 minutes for the next. They use the format and structure they need to best tell the story being told. They produce what is needed to engage without having to stick to the rules of an old rigid television structure.

I think education today is much like this Netflix scenario. We, like many network shows, are often hampered by old rigid structures and policies that keep us stuck in a particular time frame with various interruptions from time to time. It is no secret that there is a great deal of apathy towards education in today’s world as we struggle to engage a “new” type of learner.

The question here becomes: Do we need to become more like Netflix? And, if so, what changes do we need to make to get out of the traditional conformity or structure of our current education system, so that we can get to something new, and frankly more user friendly? Frankly, is it possible to make a big change to something that has been around for a very long time? And if so, how?

Will we/can we find ways to better engage digital natives who live in an on-demand, information ready world?
Will inquiry or project based learning replace the traditional classroom setting?
Will we give up traditional seating arrangements for more flexible, comfortable environments?
Will learning capacities of different standards overpower traditional grading scales?
Will online learning components blend with traditional classroom settings?
Will student choice drive a pathway to interests in high school? As opposed to the traditional “a la carte” style classroom scheduling.
Will we move past measuring success on standardized tests to taking into account social and emotional intelligence as well? 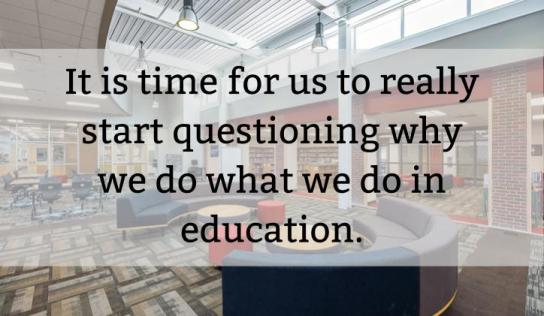 I am not sure what the next big change will be, but I am sure it is coming, and I can tell it needs to come. Just like on demand series are flooding the market and outranking traditional television programming, something new out there will be the next big shift in education.

I am not sure where the revolution will start, but I do know it is starting. We cannot continue to teach 21st century learners with 20th century methods on a 19th century structure and expect our students to be successful in the future. It is time for us to really start questioning why we do what we do in education and be sure that it is the best learning opportunity for a new generation of learners.

Join me, or let me join you… and let’s start a revolution! It will not be easy, but it will be worth it!